No Apartments at the property match your requirements 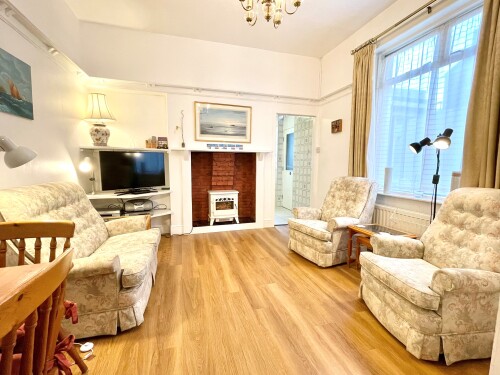 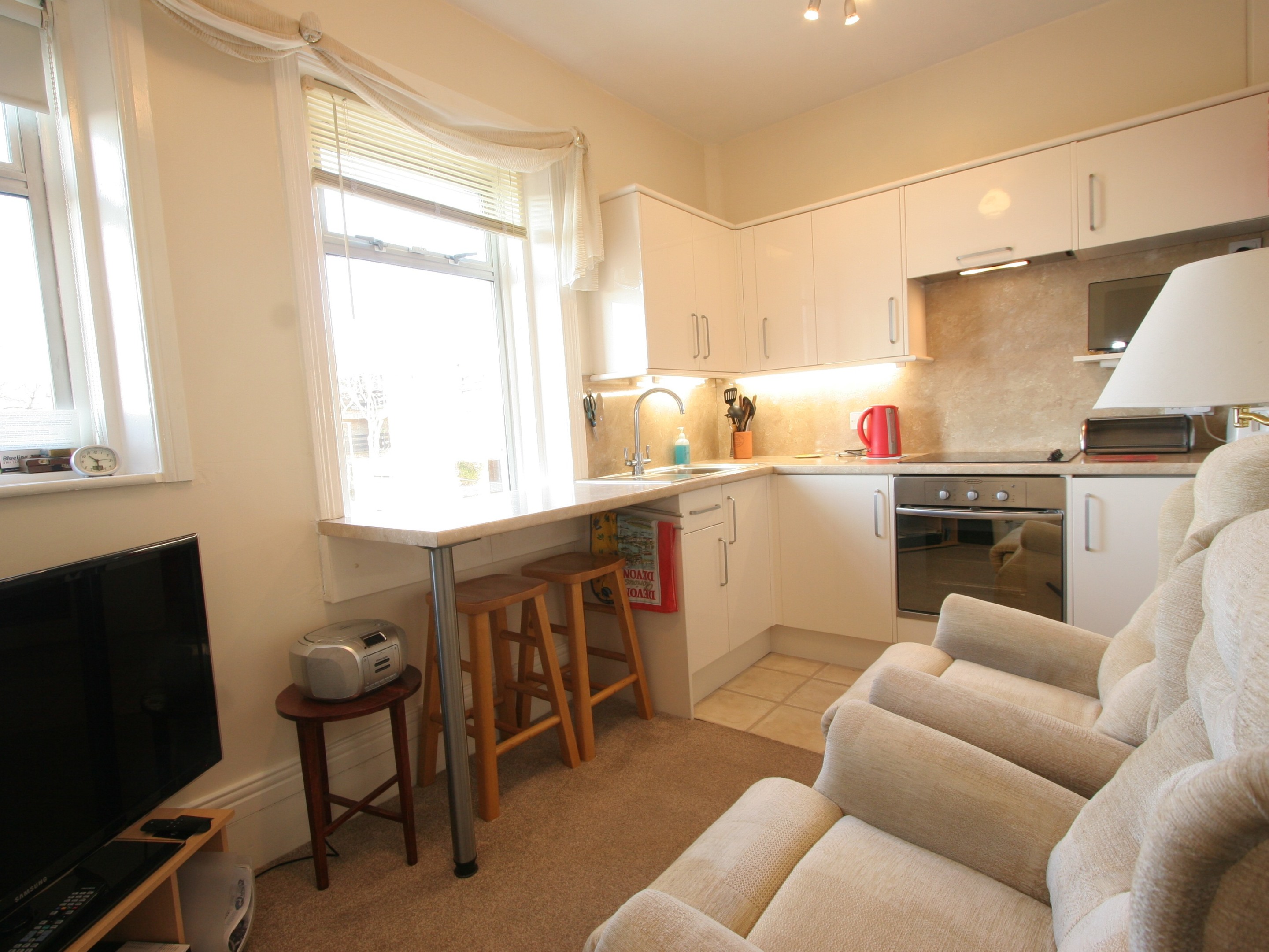 Apartment 2 is for 1 or 2 people and is up the first flight of stairs (accessed by stairlift if required). It is to the rear of the building ...

Apartment 2 is for 1 or 2 people and is up the first flight of stairs (accessed by stairlift if required). It is to the rear of the building. The apartment has been completely redesigned and furnished. It has a cosy lounge/kitchen area and a smart ultra-modern bathroom with new larger shower cubicle, and underfloor heating. The decor is fresh sky blue with matching curtains and bedding, and a new high quality carpet. The bedroom can be made up as one superking size bed or two twin beds. The kitchen has high gloss cream finish, with integrated fridge, oven, ceramic hob, microwave, modern fitted units and stools at bench. The sunny lounge area has two comfortable, fully reclining chairs, so it can feel like sunbathing in the afternoon sun! The apartment has a 40 inch smart TV, full HD with freeview and Amazon Fire stick for catch up TV (BBC iplayer, ITV hub, channel 4 and 5), DVD player, video recorder, CD player, radio and clock radio/alarm. The bathroom has sparkling quartz granite floor tiles with underfloor heating, a modern curved shower cubicle, new wall tiles, ceiling and spot lighting, heater, extractor fan and new double glazed window. Apartment 1A is right at the front door and all on the ground floor. It enjoys a straight- out- to sea view….with binoculars provided to add ...

Apartment 1A is right at the front door and all on the ground floor. It enjoys a straight- out- to sea view….with binoculars provided to add to enjoyment. The sitting room is very large with a leather suite of two chairs plus a two seater sofa, all reclining, and a circular dining table in the bay window. The cream kitchen along one wall blends in so as to be barely noticeable. This room has high ceilings adorned with beautiful plasterwork – original features of this Victorian house. Apartment 1A is suitable for all ages but is hugely popular with slightly older visitors who enjoy its particular benefits. The apartment has a 40 inch smart TV, with freeview and Amazon Fire stick for catch up TV, DVD player, video recorder, CD player, radio and clock radio/alarm. The new kitchen blends into the lounge with the soft magnolia gloss colour and no-handle doors. It has integrated fridge and dishwasher, compact sink, microwave. The tall cupboards give lots of space for food storage. The under cupboard lights set off the granite patterned worktop. The bedroom is off the sitting room, it has a fitted dressing table and wardrobe and the beds can be made up as one superking size bed or two twin beds. Again the beautiful plasterwork adorns the ceiling. A carpeted ramp leads to a door to the back yard, and on the other side of this a concrete ramp slopes into the back yard. For visitors with mobility problems this facility is frequently utilised and we allow these visitors a key to the back gate for easy access to their car or simply ease of leaving the building in a step-free manner. The carpeting is of a flat loop style to ease movement of a wheelchair. The bathroom has large, light tiles and a spacious walk-in shower with both an overhead and hand-held shower. The shower seat, normally flush to the wall, folds down easily with a strong leg and a grab rail. The shower door, in 8mm glass, slides smooothly. The basin has space for toiletries. The floor is warmer than tiles. Apartment 3 normally provides accommodation for 4 people. The stairlift helps visitors up one flight of stairs if necessary, and there are t ...

Apartment 3 normally provides accommodation for 4 people. The stairlift helps visitors up one flight of stairs if necessary, and there are then 5 steps to the landing of Apartment 3 on the first floor. The Stag dining furniture is positioned in the bay window to allow maximum benefit of ‘watching the world go by’. It also has lovely original ornate ceiling plasterwork. A couch and armchair with footrest complete the sitting area. Apartment 3 suits families and visitors of all ages. We have had the pleasure of welcoming into it several guests of 90+ years and even had the honour of accommodating a centenarian! The apartment has a 55 inch curved smart TV, full HD with freeview and Amazon Fire stick for catch up TV (BBC iplayer, ITV hub, channel 4 and 5), DVD player, video recorder, CD and, radio and, in each bedroom a clock radio/alarm. This apartment has magnificent sea views over Cullercoats Bay and along Tynemouth Longsands to Tynemouth Priory and the Tyne piers. Binoculars are provided. The kitchen area has an integrated dishwasher, fridge, timer oven, ceramic hob. This modern kitchen has a smart high gloss cream finish. One bedroom has a super king size bed with pocket sprung, gel top mattress, and there is room to slide in an extra bed if required. The other bedroom has 2 single beds and a view to the sea. The white bathroom is fully tiled with electric shower over the bath. 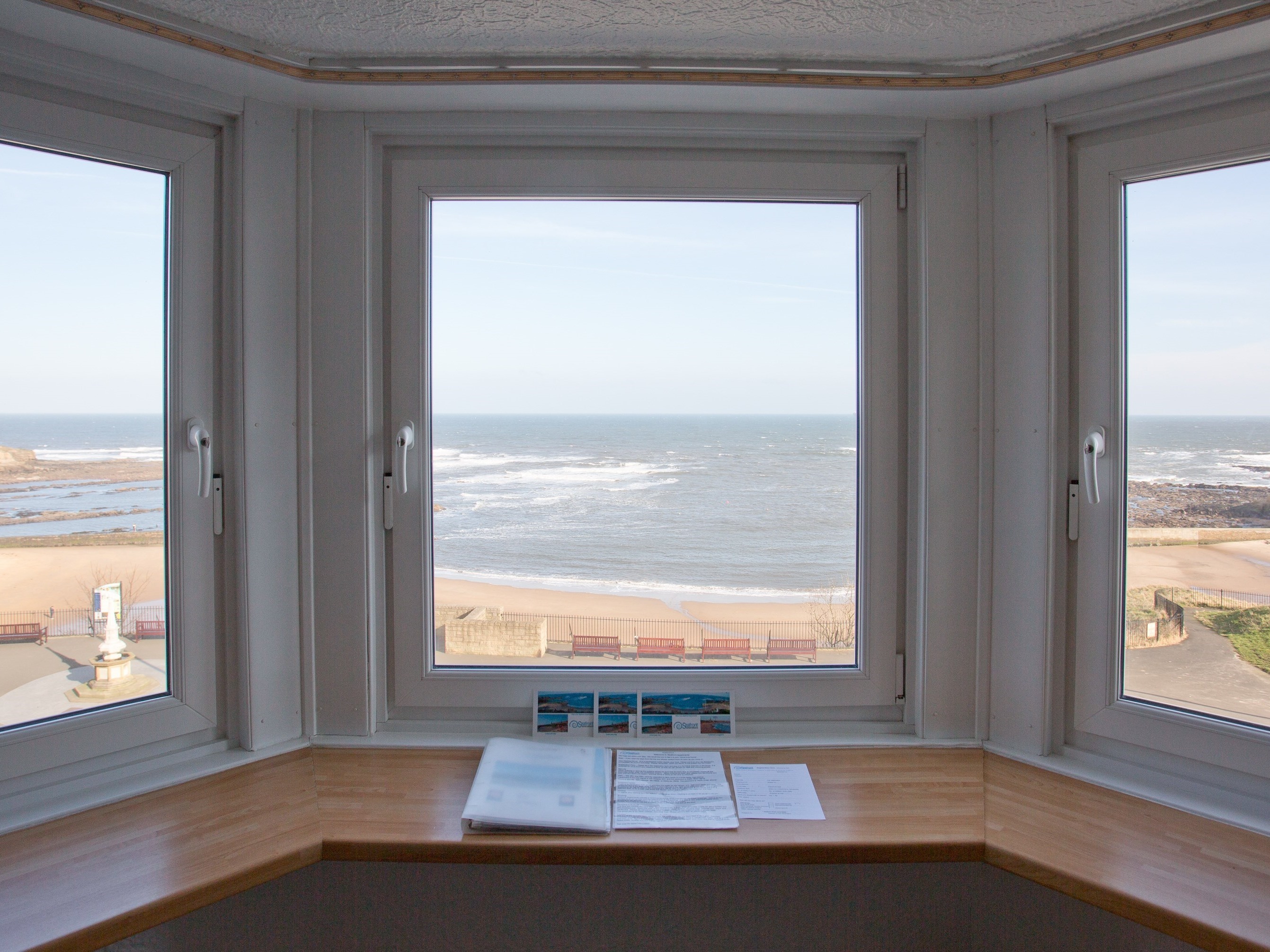 Apartment 5 is located on the second floor and to the front of the building, giving a fantastic panoramic view. Binoculars (2 sets) are prov ...

Apartment 5 is located on the second floor and to the front of the building, giving a fantastic panoramic view. Binoculars (2 sets) are provided to give maximum enjoyment. The kitchen/living/dining room gives the view – with 2 options of dining possibilities- one at a beech block dining table (on castors for flexible usage) and one at the window as shown designed for use with bar stools. There are 2 fridges, each with a freezer box, to give more capacity for families. For relaxation there are 2 leather chairs with footstools and a leather sofa also with footstools. The whole room has a modern laminate floor. The apartment has a 40 inch TV, full HD with freeview and Amazon Fire Stick for catch-up TV (BBC iplayer, ITV hub, channels 4 and 5) , DVD player, video recorder, CD player, radio and, in both bedrooms a clock radio/alarm. The kitchen area is beech effect with integrated dishwasher, ample work surface and storage for food. It has 2 fridges with freezer box, a microwave and a new induction cooker with oven/separate grill. The advantage of induction is that it heats faster and is safer, especially for children as the residual heat of the hob is much lower than ceramic. 2 twin bedrooms in this apartment provide normally for 4 but can sleep 5. The front bedroom has a superb view to the sea through the Velux window. The blackout blind is much loved by parents who find the children sleep longer! An extra bed is possible in this front bedroom. The rear bedroom can be made up as one superking size bed or two twin beds and is fitted with a black-out roller blind and curtains with black-out linings. The bathroom is divided into 2 rooms. Both rooms have glamorous all-over tiling, spot- lighting and underfloor heating. One room has a large walk-in shower plus a three-quarter size bath, and heated towel rail. The other room has the toilet and basin and is attractively tiled with an appropriate seaside theme. 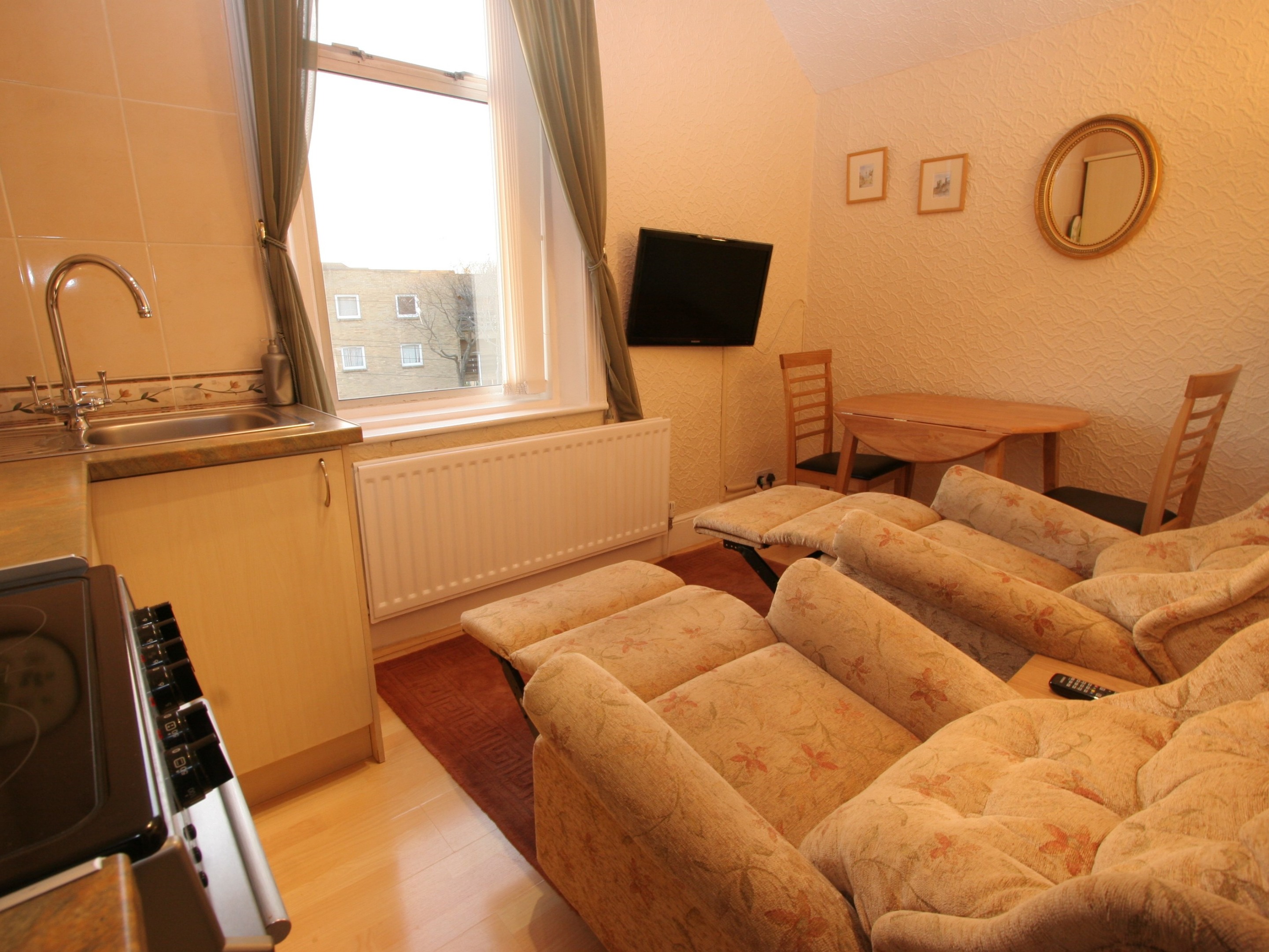 Apartment 4 accommodates 2 people, and is one and a half floors up and at the back of the building. It can be accessed with 2 stairlifts and ...

Apartment 4 accommodates 2 people, and is one and a half floors up and at the back of the building. It can be accessed with 2 stairlifts and 5 stairs with a few paces walk along the landing in between. The kitchen/lounge is small and cosy – with maple units and laminated floor, a wool rug and 2 fully reclining chairs, so it can feel like sunbathing in the afternoon sun! It looks out to Cullercoats Primary School behind Beverley Terrace. The apartment has a 40 inch smart TV, full HD with freeview and Amazon Fire stick for catch up TV (BBC iplayer, ITV hub, channel 4 and 5), DVD player, video recorder, CD player, radio and clock radio/alarm. The cooker is new with ceramic hob. Entry is into the bedroom, off which is the bathroom in one direction and the sitting room/kitchen in the other. The bedroom is bright and cheerful with Sanderson curtains, plus a fitted wardrobe. The beds can be either a superking size or 2 twin beds. The bathroom is newly refurbished; with curved, spacious, walk-in shower, fully tiled in large format tiles, lit, demist mirror and floor warmer than tiles.

Recent quotes from guests “BEST flat ever all around the world! Thank you for a beautiful apartment, very well equipped” “BEST place I’ve stayed in 30 years of visits up here: wonderful – thank you”. Seafront Apartments were formed by the clever architectural adaptation in the 1960s of a large Victorian terraced house into 6 new apartments and updated recently. Some retain original features of beautiful ceiling plasterwork. All apartments have a fully equipped kitchen, ironing board, hair drier, smart TV with Amazon Fire Stick for catch-up TV. Front apartments have binoculars. Bed linen and towels are included. There is a laundry room, many brochures on tourist attractions, and in the back yard, buckets and spades plus secure fixings for bikes. Enjoy watching the continuing change of scenery, as the tide comes in and goes out, the canoeists, paddleboarders, surfers, swimmers, the lifeboat, joggers, dog walkers, pram pushers, walkers and cyclists of all ages. There is lots to do for all ages in Cullercoats; the beach, rock pools, caves, lifeboat station, Art Trail, toddler park, and hire shop for bikes, kayaks and paddleboards. There are many glorious coastal walks with uninterrupted sea views of the beaches. To the south, to Tynemouth passing Blue Reef Aquarium, Tynemouth Park with mini golf maze and boating lake, the surfers on Longsands beach, to the Priory and Castle, the market at weekends, plus many bistros, cafes, bars and restaurants. Tynemouth was recently voted one of the top 10 coastal places to live in the UK. To the north to Whitley Bay to the renovated Spanish City with its 3 new cafes, attractive promenade, on to the famous causeway linking to St. Mary’s Lighthouse, reachable at low tide. Equally there is ample opportunity to rest and relax, sitting on the beach, walking or watching the sea and its ever-changing moods is therapy in itself. Early risers can often see stunning sunrises which inspired our logo.

Cullercoats was one of the UK’s four famous “Artists’ Colonies” in the 1880s. The most famous painter was the American, Winslow Homer who made his home here for 18 months. Homer is now recognised as one of America’s most famous painter s of people of the 19th century...Bill Gates bought one of his paintings for $30mill, a record for an American painting in 1998. Other famous artists were Jobling, Slater and Carmichael. Artists were attracted by the scenic bay, by the fisher women and men, by the unusual light and probably by the Geordie friendliness. The Cullercoats Art Trail is a fascinating walk around the bay, as the brochure portrays the best known paintings showing where in the bay they were composed. Our aim is that our guests return again and again We believe strongly in cleanliness and continual improvement to the apartments. Each apartment is fully self-contained on one level, with its own key and inside the main front door. Andrew formerly worked for a global cleaning chemicals company advising top hotel chains how to improve their cleaning. Andrew is multi-lingual, fluent in Spanish, German, French, Portuguese and some Swedish

Apartment 1A, on the ground floor at the front with seaview has a back door directly to the back yard with a ramp on either side. The door width is 695mm. Inside the apartment it is possible to provide on request a bath bench, bath chair, toilet frame, and portable raised toilet seat